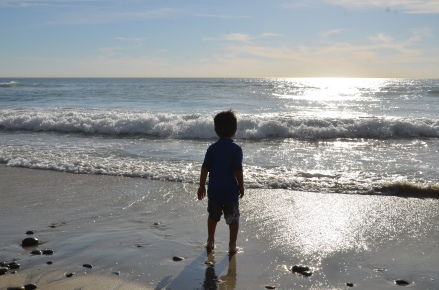 I remember when my son was one and a half and  I took him to his doctor’s appointment.    The doctor gave me a list of the words my son was supposed to be saying. I told the doctor,         “No. He is not saying anything”. He wouldn’t say Mama or Dada. The only word he would say was “no”. I took my son to four different doctors. They all said it was normal, that he would start to speak in no time. After me insisting, a doctor finally gave me a referral to a speech pathologist. She even told me that he was ok, and that they couldn’t offer me any speech therapy for him. Since I could communicate with him and he understood what I said there was no problem.

How was it ok for my son not to say a word!? I couldn’t understand anything! He just pointed and grunted. I didn’t know if his tummy was hurting or his head. I sometimes didn’t know what was wrong when he cried. It was so stressful! I don’t know how many times I cried and prayed my self to sleep. It was so hard to stand infront of my son and not know what he was saying. How is it ok for me not to know what my child needed?!

When he turned two years old he still wouldn’t say much. He would make sounds, a few words and point to what he wanted. After a few tries with a new doctor, she finally agreed to help me contact a center where they help children who need a little assistance with their development. When I had my meeting I was so happy because they were surprised he was not receiving speech therapy. I was so happy that someone agreed with me. They were listening to what I was saying.  Someone validated what I had been saying and thinking all this time! My child did need help. Him not being able to say anything other than “no” was not ok. He started speech therapy a few weeks after our meeting.

My son is now 5 years old and still has two sessions per week of speech therapy. He is able to speak in complete sentences and is able to use a lot more words. There are times in which  he has trouble pronouncing sounds or we have trouble understanding what he is saying. He is so patient with us though. He will repeat what he is saying various times and gives us clues so we can figure out what he is trying to tell us.  The most important to me is that he can communicate if he is hurt, he can tell me about his day, and best of all he can also say he loves me too much.

2 thoughts on “Journey To Speech Therapy”